Am I a prisoner 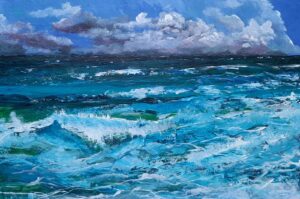 today is the first day of ban of traffic. As has been announced from yesterday, it came to my mind the first time that i “locked” myself in. It was in the Greek Ashram, almost 27years ago, summer time, for a long week-end, and it was very strange feeling as the big doors closed…..ofcourse we were lots of people, it was Guru Poornima, a big yogic celebration and i didn’t bother, until the time that i had to leave…..the procedures so, to “unlock” myself, gave me that feeling of enclosure. I wanted to leaveeeee!

Since i remember my existance, i had always problem with enclosure. I was feeling suffocated

Since then, i visited the greek ashram plenty of times. For a whole year, i was keep on visiting on-of and i stayed long periods as  i did my first yoga teacher training. The feeling was keep on coming and going, until i landed in the ashram in India. BYB is in Munger. In the footheals of Himalyas, in the state of Bihar. a really taff area and 20+years ago, even taffer. Is a town of 1million people, and  you need a 2days trip to arrive from N.Delhi and 12+hrs from Kolkota. The ashram there, its much much bigger and the gate, also huge! Joy was mixed with excitment, surprise, curiosity…..although i’ve been to India before, i had the experience only of the other ashram, in Deoghar, the Rikhia Peet and not from BYB. the big door closed, in the reception happy faces, light atmosphere and all went fine! my room had window bars, as most of the other buildings and the garden wall was very, very tall. i was viewing Ganga and the life around her,  and there were days that i was feeling hopeless!

Walks around the huge gardens, most of the times alone, and the big wall there! pressure…..but i was there because i wanted….two opposite feelings. Duality, as is this planet. Yoga=balance!

As a foreigner i could go to the market once a month. Two months of being in the ashram, i went out in the town of Munger. the feeling was so strange and i was feeling like an allien! when i returned back, 3hrs later, i was relieved. Gradually, i start to feel comfotable with my enclosure. Trust, security, the group of my class, the community, they all contribute to feel, or better to understand what Freedom represents to me. It was my life in BYB that made me to reflect on freedom. Who is free? who is really free? what is freedom? Can everyone be free? how many free people i knew?

Unfotunatelly, i ended in the coclusion that i knew one or two people that they were free. I “saw” the  prisons of my friends and family and ofcourse of myself. And it was at that whole year of my diploma studies to BYB, that partly conscious and partly uncoscious, that i decided to set myself Free!

Today, with this ban of traffic, i found myself quite free….and i want to share that “secret”: Acceptance!